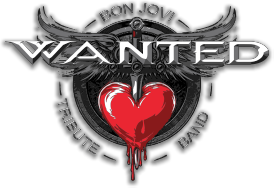 Perfroms the music of Bon Jovi the way it was meant to be played as a TRUE "Bon Jovi Concert Experience."

The musicians "WANTED: The Bon Jovi Tribute Band" recreate the extensive catalog of Bon Jovi Rock and Love songs that have stood the test of time and appeal to generations of music lovers including: Runaway, Livin' on A Prayer, You Give Love a Bad Name Wanted Dead or Alive, Who Says you can't go Home, and Have a Nice Day